I’ve gone back and forth on this year. I thought that it was the fault of the year’s quality — I made one too many Twitter proclamations, saying as much. What a weak offering, I thought, over and over, as I cycled through endless television shows I’d already seen. If only there was something worth seeing. But, of course, there was. It was a beautiful year. I just didn’t see it.

It’s been a year of transition, and resistance. I uprooted my life, moving from a city I loved to a new town that I wanted nothing to do with. Everything felt like sandpaper: the conservative politics, the small town culture, the churches on every corner. Slowly, my optimism faded, replaced by a dull pulse at the back of my mind, reminding me that something was wrong. I lost a bit of myself this year. And somewhere along the way, I lost movies too.

I place some of the blame on the relocation. The closest art-house cinema is a 90 minute drive, and if a movie didn’t go nationwide, my local theater didn’t show it. The majority of the movies I saw this year were at home, once they were available to rent or stream. This surely didn’t help, but I can’t say that it was the only reason. When I’m honest with myself, I think I started to fear movies. Fear what they represented, in my past, my present, my future. They have always been my northern star, but this year the light got harder to follow. It’s not a permanent affliction, of course; I will get everything back, eventually. But I can’t say it wasn’t difficult. And I can’t say that it didn’t affect my choices.

I thought about not posting my list this year. It’s woefully incomplete — see: Uncut Gems, Atlantics, Portrait of a Lady on Fire, A Beautiful Day in the Neighborhood, Synonyms, etc. — and sharing it felt inauthentic. But then that felt like a cop-out, too, and so here I am. I had a bad year, and it shows. But I’m working on it.

Rian Johnson is one of our most exciting filmmakers, and not even the darkest of internet trolls can get him down. After the relentless beating he took for The Last Jedi (the only good Star Wars, yes, I said it), he rose from the ashes to produce his best film yet in Knives Out. Billed as “a Rian Johnson Whodunnit”, this rollicking mystery is a source of endless twists and fun, with the brains to back it up. Ana di Armas gives one of the year’s best performances as Marta, the unwilling center of the film’s mystery, and Johnson’s script is so sharp, it might as well be carved in stone. In a year full of reboots, existing IPs, and the ever-looming Disney overlords, Knives Out proved that original storytelling still has a place in mainstream cinema.

The most abrasive film of the year, Her Smell shows a major step forward for indie mainstay Alex Ross Perry. The great Elisabeth Moss reaches new heights as Becky Something, the lead singer of a riot grrl punk outfit. Her performance is a punch to the face, the kind of daring feat that is hard to watch and even harder to look away from. But while it’s easy to attribute the film’s success to Moss’s talent, that would discredit the excellent work of the supporting cast, including Agyness Deyn and Gayle Rankin as her bandmates, and Cara Delevigne, Ashley Benson, and Dylan Gelula as the new girls on the scene. It’s a tough watch, but once you claw your way through it, you’ll see that it was all worth it.

8. Once Upon a Time…In Hollywood

A languid, melancholic hang out movie that saunters its way into revisionist fairy tale. And dammit, I didn’t know Tarantino had it in him. I’ll admit to never being enamored with Quentin Tarantino the way a lot of people are. I often find him fussy, reactionary, and to put it blunt, incredibly annoying. But Inglorious Basterds is a great movie, and so is his latest, which shows the smack-talking filmmaker at his most chilled-out. A trip back to 1969 Hollywood, Once Upon a Time In Hollywood is Tarantino revisiting the good ole days with a magic hour lens. But it’s not all good vibes and sunny days; this is Manson’s Hollywood, after all, and the tension between new and old is at an all-time high. Leonardo DiCaprio delivers his best performance as has-been actor Rick Dalton, and Brad Pitt is effortless as ever as his stuntman and only friend, Cliff Booth. There is also Margot Robbie as Sharon Tate, all sunbeams and bittersweet beauty, in one of my very favorite performances of the year. It’s everything I wanted Tarantino to be and more.

If Her Smell is a tough watch, then The Nightingale is an impossible one. Jennifer Kent’s rape-revenge Western is a sprawling, uncompromising, punishing vision that easily transcends the trappings of the genre. Set in 1825 during the British colonization, Kent tells the story of an Irish convict named Clare (a searing Aisling Franciosi) who chases a British soldier through the Tasmanian wilderness after he commits an unspeakable act of violence upon her and her family. Kent, known for 2014’s The Babadook, establishes herself as a significant directorial presence, and along with cinematographer Radek Ladczuk, crafts some of the most arresting images of the year. It is a shocking film, and a beautiful one too —that is, if you can stomach it.

Note: This is where things start heating up. My following picks, from 6 to 1, are true, all-time greats, and on any given day I could shuffle the order — which I have already done, multiple times, including moments before writing this list. But at some point, you must stop tinkering and let things lay, and so here we are. Enjoy my pain.

I do not know where to begin describing Transit, the latest from great German director Christian Petzold. It is part history, part fairy-tale, part revisionist nightmare. In my notebook, after finishing the film, I described it as a “memory mirage”, and while I’m still not entirely sure what that exactly means, it still feels true. It is the kind of film that you have trouble believing you saw even as the credits roll in front of you. On paper, Transit is about a man named Georg, who assumes the identity of a dead writer in an attempt to escape Nazi-occupied France. Now stuck in Marseilles waiting for transport, he finds himself running into Maria, a woman searching for her missing husband. It’s a 21st century Casablanca, with a Certified Copy twist. You have to see it to believe it, and even then you might not. 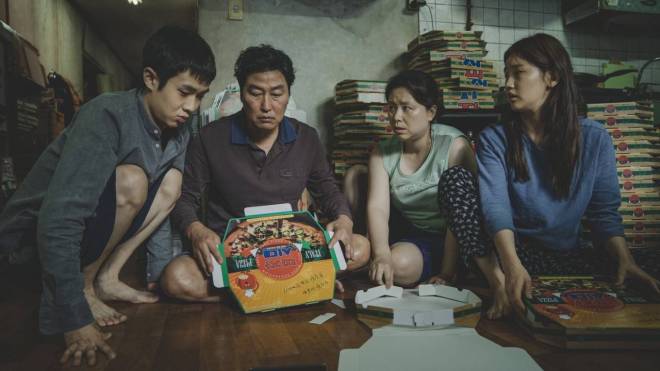 If there’s a movie from 2019 that I’m rooting for, it’s Parasite. I want this movie to win every award possible, and then win awards invented just for it. I want to erect a Bong Joon-ho statue on my front lawn. (Not really. Except, maybe?) There is just something about this damn movie that makes you want to scream its name from the rooftops. It helps that it’s good, like absurdly good, the kind of filmmaking so well-made that it should be screened in the MoMa — did I mention that my 6-1 are basically interchangeable? It also helps that director Bong Joon-ho is a consistent talent and well over-due for some international recognition. And it also helps that it’s themes of class, privilege, and oppression are as relevant as ever. What does it mean that rich celebrities are singing its praises on Twitter? Who does the title refer to, the rich family or the poor one? And what does your choice say about you? It’s the foreign language film that got Americans to read subtitles, and that enough makes it worthy of Best Picture.

The moment arrives at the end, when the curtain is closing. Frank Sheeran (Robert De Niro) is an old man now. He spends his days in a wheelchair at a retirement home, making nice with the nurses and waxing nostalgic about his life. His days, once large and unpredictable, are small now. A couple federal agents come to visit him. They have still have questions, ones only he can answer. It’s the end of the road. There’s no need to take it to the grave. Frank directs their requests to his lawyer. “He’s dead,” the agents say. Frank sits a little straighter, a familiar posture: “Who got him?” But the agents shake their heads. “Cancer.” In The Irishman, even gangsters grow old. 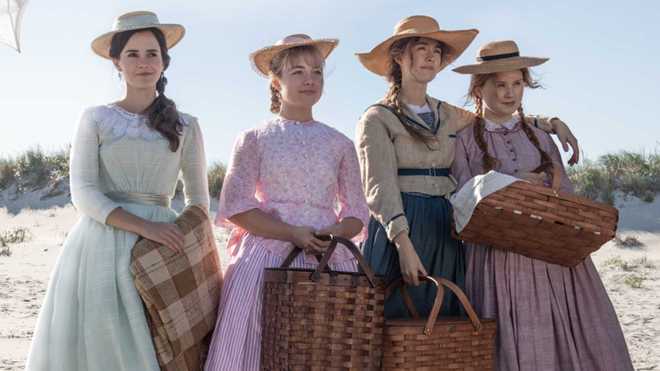 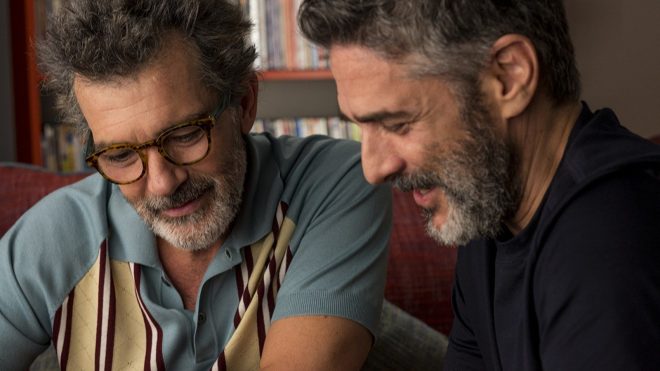 This is a big one. Pedro Almodóvar is one of my favorite filmmakers of all-time, and Pain and Glory is him firing on all cylinders. This semi-autobiographical work, about an aging filmmaker (Antonio Banderas in the best performance of the year) confronting his past, is a gorgeous meditation on art, love, and the memories that define us. Almodóvar is one of cinema’s great empaths and it shows in every frame: the tilt of a head, the touch of a hand to cheek. And that Alberto Iglesias score? It just doesn’t get better than this…

…Except for when it does. There’s not much I can say about this film that I haven’t said already. But there is this: It is a film that arrived exactly when I needed it. Sometimes a great piece of art has the power to shift your life on its axis, and sometimes it has the power to shift it back. Ad Astra, James Grey’s masterpiece, did both those things and more, and I still feel its lingering effect. We are all we have. I am all I have. That can be enough.

And so it is, my favorite films of 2019. It wasn’t a great year for me, but it was a great year for movies, and I promise to make it up to the ones I missed. Here’s to the new year, a better year. I love you all.